A Book Review by Jackie Houchin 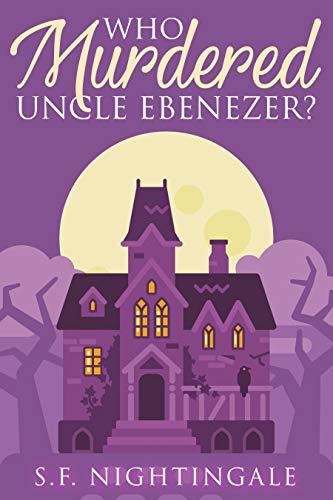 Who Murdered Uncle Ebenezer? is a short (18k) clean, cozy mystery. It’s the first in the series featuring Reverend Devin Grant. Set in New Hampshire this first book takes place during a winter storm. The Reverend has an appointment to review wedding plans with a young couple at a parishioner’s home. He makes it through the deepening snow and joins the family for dinner.

Ken, the groom-to-be, was in the military at the same time Devin was chaplain and both experienced some hard things on a couple tours.  Ken is also the nephew of Ebenezer and Bethany Spencer; in whose house he lives. His wife-to-be is the daughter of the housekeeper and also lives in the house. Oddly, there is also a full-sized stuffed lion prominent in the entryway.

All one big happy family!  Not!

After Uncle Ebenezer made a few serious passes at Ken’s future wife, the hot-tempered ex-serviceman hauls off and punches him. A punch is returned and a fight ensues. This all is confessed to the Reverend at dinner time.

After the meal, just when they begin the wedding plans discussion, the housekeeper discovers the uncle’s dead body and screams mightily. They all rush to the library and see the man on the floor, a strange sheen on his face.The snowstorm has turned nasty by this time, so no one is leaving the house, and “Detective” Reverend Grant has a chance to sleuth before the cops finally arrive, and afterwards too.

In this “Locked Room ” scenario you have to read the book to find out who (as the title asks) murdered Uncle Ebenezer?