Re-blogged from Melissa’s Mochas, Mysteries, and Meows. on November 11, 2022

Mudpie was very excited to have the opportunity to interview Earl Grey, the feline star of this series. We hope you enjoy meeting him! 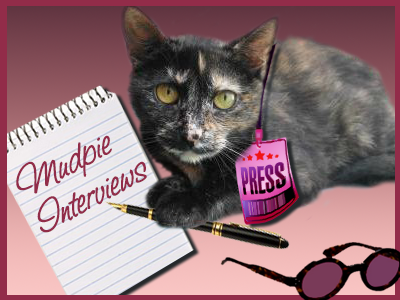 Welcome, Earl Grey! Thank you so much for chatting with me today. Could you start by telling us a little about yourself and how you came to live with Dotty?

Hi Mudpie. Thank you for speaking with me today. Most people ignore me but the things I’ve overheard … I could have solved a case or two.

I’m a pedigree British Blue cat, or Shorthair, as my breed has been renamed. I prefer blue as it matches my luxurious grey fur, which has a blueish tint. I cut an imposing figure, despite some people calling me fat and spoilt.

My first owner was the Duke of Ditchford and we lived peacefully together in Windrush Hall, in the British Cotswolds. It was his family’s house and had been passed down for generations. Unfortunately, the Duke closed off the main house and we only lived in two rooms. But I had the run of the hall where plenty of mice lurked.

After the Duke died, his man, Norman, kept an eye on me for a while until he was arrested. For a crime he was totally innocent of, I must point out. Oh, and I did enjoy annoying the Welsh police inspector when Norman took me with him to the police station.

That was where I met Dotty. She rescued me and took me back to her place, and then we moved to our current cottage. It’s not like the old hall, but I’m know I’m loved and I’m well fed.

I wake early and potter down the stairs of our cottage and through the door to the adjoining farmhouse, which is always kept open for me.

Norman lives there now, and he likes cooking a good breakfast. He rarely gives me any, but Aunt Beanie, who owns the house, often feeds me tip bits of bacon or sausage. To give Norman his due, he always gives me my own breakfast.

I spend most of my day curled up by the Aga, a larger cooker which gives out lots of heat.

At some point I’ll wonder outside. I have the run of the farm buildings and there are usually mice hiding somewhere or voles trespassing.

In the summer I’ll find somewhere warm for a nap, but in the winter I’m soon back inside by the Aga.

I’m lucky. Dotty is a great cook and I can usually persuade her to share her meals with me. By the end of the day, I’m full and ready to curl up on her bed to sleep.

Is it true that you live with a pig?!?!?!  How do you feel about that?  And more importantly, how do you protect your food?

Agatha was a small, wirey bundle of bristles when I first met her, and she was very sorry for herself. She’s a pedigree Berkshire pig, but she lost her family to a nasty pig disease.

When she arrived at the farmhouse, she insisted on curling up with me, which was annoying at first, but then she grew on me. She’s always been very respectful, if rather boisterous, as her confidence grew, but she knows my food is mine. She gets a sharp tap on the snout if she tries to eat anything she shouldn’t.

But she’s so big now and still full of energy. She keeps knocking things over and I know Norman is worried she’ll hurt Uncle Cliff. He’s threatening to move her outside.

The latest mystery you star in, Gavels, Tinsel and Murder, takes place at Christmas. Do you have any special plans for Christmas this year? It must be beautiful there in the Cotswolds.

It’s cold. I like the sun, not the snow which is wet and covers everything. And worse still, the mice go to sleep. Christmas was nothing special with the old Duke.

I do like the sparkly Christmas decorations, which are an acceptable alternative to mice, although Norman and Dotty tell me off when I play with them.

The best thing about Christmas at the farmhouse is that everyone loves to cook and eat. So my plans are to take full advantage of this side of the festive season.

Do you assist Dotty in any way in solving the mysteries she finds herself entangled in?

Not anymore. You see, I was catnapped. They were a lovely old couple who fed me all sorts of wonderful French delicacies, but still, it was scary.

And then I had the visit to the police station with Norman, when he was arrested. One time is enough, although it would be fun to goad that Welsh police inspector again.

I do spend a lot of time listening in Dotty and her friends discuss their current cases around the kitchen table, but personally, I can’t understand why humans have to be so beastly to each other. And they call us animals.

And I do worry about them. Dotty has been hit on the head and shoved down a flight of wooden stairs, and a suspect broke Aunt Beanie’s leg a few months ago.

I prefer a peaceful life, curled up by the Aga.

Can you give us any clues as to what’s next for you two?

My kitty senses tell me there’s danger ahead for Dotty. I wish she’d leave the detecting to the police, but I know she can’t, especially if she feels there’s an injustice. I just hope she doesn’t end up in jail, or worse.

One thought on “INTERVIEW – Melissa’s Mudpie and Earl Grey”