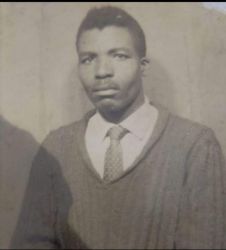 Today marks 29 years since my dad passed on. He loved and spoiled me, even when he had nothing. He made sure that his last born was happy, with the little that he had. I miss him dearly. Time flies.

Today I choose to talk about my unspoken hero.

In his time, he was well educated. After his primary, he trained at Mpemba and the government later sent him, together with 5 other men (one of them being an uncle to my husband), to the Massachusetts University to further his studies.

He supervised the early stages of the Kawalazi Tea Estates (I remember us staying in the then big white house there), and the orchards around Limphasa area, and several agricultural projects in the northern region of Malawi. He taught in secondary schools. A few days ago. one lady said, and I quote, ” What your dad taught us in secondary school is what is being taught now at Bunda (Luanar). That man new his agriculture well.”

Why do I write all this?

FIRST, to celebrate his achievements which can still be seen right now in a number of places, though some are not well maintained. One of them being a family banana farm which was doing very, very well and someone decided to grab it away from my dad just because it was in his ‘ancestral land’. Not even a single banana can be seen now. This affected my dad mentally later in his life.

SECONDLY, when he got popular, he started drinking heavily. To a point of even selling the only house he built with his retirement money just to support his drinking habits, which ended us in poverty. That house still stands strong. But thanks be to God for Jesus that my dad made things right with Him just a few months before he passed on. He died a lonely man despite all what he had achieved in life just because in the prime of his life, he thought he was having fun to a point of destroying his well-deserved package. No one could even tell that he was the brains behind what is so popular now in many areas, just in the name of fun.

LASTLY, I write to warn those that are younger now that one day time will catch up with you. Don’t let the so-called fun of today cause you to regret in your latter years, and in between, causing so much pain to your loved ones, who will remain with you in those years of regret. Ecclesiastical 12:1-8 is clear about this.

1The words of the Preacher, the son of David, king in Jerusalem.

2Vanity of vanities, says the Preacher,
vanity of vanities! All is vanity.
3What does man gain by all the toil
at which he toils under the sun?
4A generation goes, and a generation comes,
but the earth remains forever.
5The sun rises, and the sun goes down,
and hastens to the place where it rises.
6The wind blows to the south
and goes around to the north;
around and around goes the wind,
and on its circuits the wind returns.
7All streams run to the sea,
but the sea is not full;
to the place where the streams flow,
there they flow again.
8All things are full of weariness;
a man cannot utter it;
the eye is not satisfied with seeing,
nor the ear filled with hearing.

We forgave him and loved him no matter what he took us through as a family. And I still love him now. He was the best dad ever. His personality was very special: very quiet but fun to be around. I miss him and all the sweet memories we made together as a family.

He will always be my Hero – Mr. Darson Alifeyo Gondwe, AKA “DA” Gondwe.

Till we meet in glory land.