by Gary Corby and narrated by Erik Davies

An Audiobook Review by Jackie Houchin 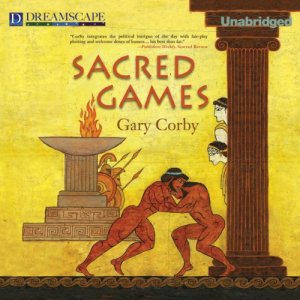 SACRED GAMES by Gary Corby Is one fantastic read! I was drawn into the story immediately, caught up in the excitement, the intrigue, and the frightfully dangerous sports contests of 460 BC.The story is set at the Olympic Games in Olympia itself, during the four days when Athenians, Spartans and all of Helles (Greece) compete for the coveted victor’s crowns – some to the death. An altercation between two contestants for the deadly martial arts pankration event, leads to a murder that could escalate into all-out war between the cities of Helles.

The killer had to be found and punished, be it Athenian or Spartan, and Nicolao our hero, who is a young crime investigator is given the task by the Judges of the Games. Not strong in body, but clever in mind, he follows the clues, questions men and women on both sides – sometimes getting beaten to the pulp in the process – eager to clear his best friend’s name, save his life and stop a war. Of course, his very clever and determined wife, Diotima, as well as his nerdy” little brother, help in their special ways.

There are characters you love to hate, some who are downright funny for their eccentric ways, others you admire, and some who are pretty scary and you fear they will do away with our hero. Corby uses some “modern” words in the mouths of his characters here & there, which add to the humor aspect. (“Finders-keepers” said lightly by Nicolao, picking up the eyeballs recently gouged out of a corpse!!)

The mystery is finely plotted and exciting. There is the proverbial “ticking clock” (The murder must be solved during the four days of the Sacred Games or all “hades” will break out), and the mounting climax had me biting my nails. I learned a lot about the early Olympic games. The contestants were all men and performed naked. There were chariot races and boxing. And of course, the pankration, which is a no-holds-barred (except gouging eyes and biting) Martial Arts competition that usually ended in the death of one of the men. Note: there are some occassional allusions to sex, but the scene is always cut at that point.

There is not an audiobook that I’ve read in the last few years that has been so hard to stop listening to. I stayed up several nights into the wee hours because I just couldn’t push the stop button. The narrator, Erik Davies was excellent, reading all the voices clearly, so I never got lost in the story.

I highly recommend this book!