Written and narrated by Ann Hood

An Audiobook Review by Jackie Houchin 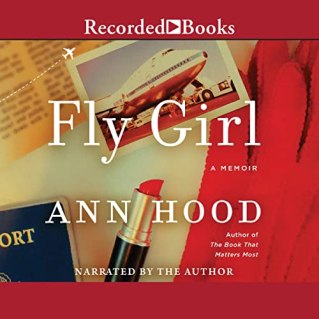 FLY GIRL is a memoir by fiction author Ann Hood about her struggle to become, and then time spent as, a Flight Attendent for TWA (Trans World Airlines).

As a child watching the contrails of planes overhead, Ann Hood promised herself that one day she’d be on one of those planes and fly all over the world. It took determination, guts, and a lot of hard work to get there.

Because the first cabin attendants were all men, there was a “push” against the male solidarity. Then came the idea that women on board should be sex kittens. It’s why the height, weight and beauty qualifications (hair color & length, skin, legs) were so strict.

Ann didn’t mind. She made herself into what they wanted and kept applying – her goal to fly TWA (although friends told her to apply to United) – so she could travel to exotic places like Paris, London and Rome.

Finally, she was accepted and went on “trial” for six months. But as the newbie, she flew the least desirable routes and worked the hardest job in flight. She was so proud of her uniform with the wings and her goal achieved, she didn’t care, just worked harder (and learned important lessons).

Besides her personal story there is also the history of passenger aviation and how it grew in numbers and luxury. Imagine, chateaubriand in first class, carved right at your seat!! Wines in glass flutes. Warm, freshly baked cookies and brownies served throughout the plane!  Then came deregulation of airlines, and she watched not only the decline in service fall to a bag of peanuts and coffee in paper cups with powdered cream, but also the end of her job. Still, she rode the dream till the end.

She tells the stories beautifully (both her own and TWA’s). I grew up wanting to be a stewardess as well, but didn’t have her push. Now I fly the world in budget class and paying for it, sometimes without even the coffee!

A truly interesting read, and it’s narrated so well by the author.